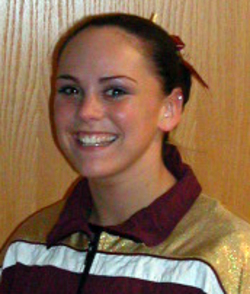 There has been success at the Collegiate level also: Surrey Gymnast Jaynie Reynolds, completed her gymnastics scholarship at Seattle Pacific University in 2006. Jaynie was a four-time “ALL American”. Jaynie competed for SGS for three years and represented BC at Canadian Championships, Western Canadian Championships, and Western Canada Summer Games. Jaynie is now a WAG coach here at SGS.

We have 3 former SGS athletes on gymnastics scholarships. These are their accomplishments over the years. 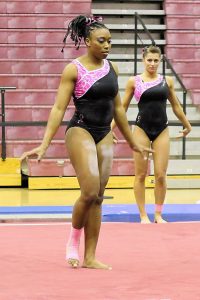 2013… Academic All-Big Ten honoree… competed on bars, beam and floor in eight competitions… matched a career-best 9.800 on floor three times against Penn State, Michigan and Nebraska… scored a career-high 9.800 on beam twice against Penn State and at Michigan… earned a season-high 9.825 on bars against Illinois… missed final four events of the season due to injury. 2012… Competed in 12 different competitions… earned a career best of 9.850 on the bars against LSU, tying for third… scored a career high 9.725 on the beam against Penn State… Academic All-Big Ten honoree. 2011… Competed in 12 events… made collegiate debut on floor with a mark of 9.675 at Michigan State… set season and career mark of 9.800 on floor against Northern Illinois, winning the event title… posted a personal best of 9.775 on bars against Iowa State… Academic All-Big Ten selection. 2010… Competed in ten meets for Iowa… made collegiate debut at Michigan, scoring a career high 9.525 on beam… recorded career high on bars 9.750 against Minnesota. High School…Qualified for Women[apos]s Provincial National Open Team… member of Team Alberta 2007… attended Canada Winter Games in 2007 for Team Alberta… member of Team British Columbia 2008 and 2009… Honor Roll Grades 8-12, Principa’s List Grade 11 and 12.

Attended Magee Secondary School in Vancouver, B.C., Canada … coached by David Kenwright at Surrey Gymnastics in Surrey, B.C., from 2007-09 … also coached by Kenwright at Calgary Gym Center in Calgary, Alberta from 2006-07 … finished second on bars and eighth in the all-around at the 2009 Canadian Nationals in Hamilton, Ontario … team finished fourth … Helped her team win the 2009 Provincials in Langley, B.C., in 2009, winning the all-around and the bars.

Please use our Parent Portal to view or register for classes.

Parent/Child
Not available in the summer

BASES
Not available in the summer

Kid Sport – So ALL Kids Can Play!

Sport Surrey – Ahead of the Game